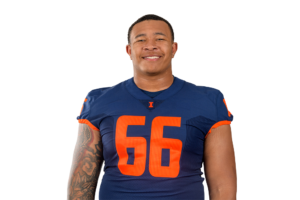 Chicago, IL, August 22, 2022 – Belleville resident and current University of Illinois football offensive lineman Jordyn Slaughter has officially signed a ‘name, image, likeness’ (NIL) deal with NextName which offers fans the opportunity to support him through the sale of his personal digital collectibles, also known as non-fungible tokens (NFT). Like a digital trading card, the collectibles are robust media files with images, music, school logo, and playing statistics. Slaughter directly receives the majority of proceeds from the sale of his digital collectibles.

NextName is excited to welcome Slaughter to the platform and invites fans to show their support by purchasing his digital collectibles here:

Slaughter attended Althoff Catholic High School in Belleville where he was a three-star recruit by 247Sports, ESPN and Rivals. In high school, he was ranked the No. 75 offensive tackle in the nation by ESPN and ranked the No. 20 recruit in Illinois by 247Sports. Slaughter chose to play at Illinois over several other universities because he wanted to represent his sate. He redshirted his freshman year and missed his 2021

sophomore season due to an injury. The Illini fans look forward to seeing him on the field during his junior year.