New site allows fans to support him and other athletes 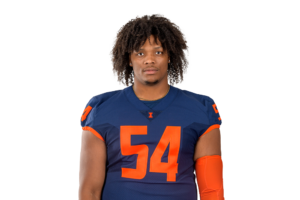 Chicago, IL, August 22, 2022 – Danville resident and University of Illinois football offensive lineman Julian Pearl has officially signed a ‘name, image, likeness’ (NIL) deal with NextName which offers fans the opportunity to support him through the sale of his personal digital collectibles, also known as non-fungible tokens (NFT). The collectibles are robust media file with images, music, school logo, and playing statistics. Pearl directly receives the majority of proceeds from the sale of his digital collectibles.

NextName is excited to welcome Pearl to the platform and invites fans to show their support by purchasing his digital collectibles here:

A junior offensive lineman, Pearl attended Danville High School where he earned many honors before committing to University of Illinois in April 2017. He was a three-star recruit by 247Sports and ESPN. He also ranked No. 41 OT in the nation and the No. 7 recruit in Illinois by 247Sports. Julian said he picked Illinois because, “it would give me a chance to represent and improve my hometown and state.” He redshirted as a freshman but played in twelve games with 11 starts as a sophomore.