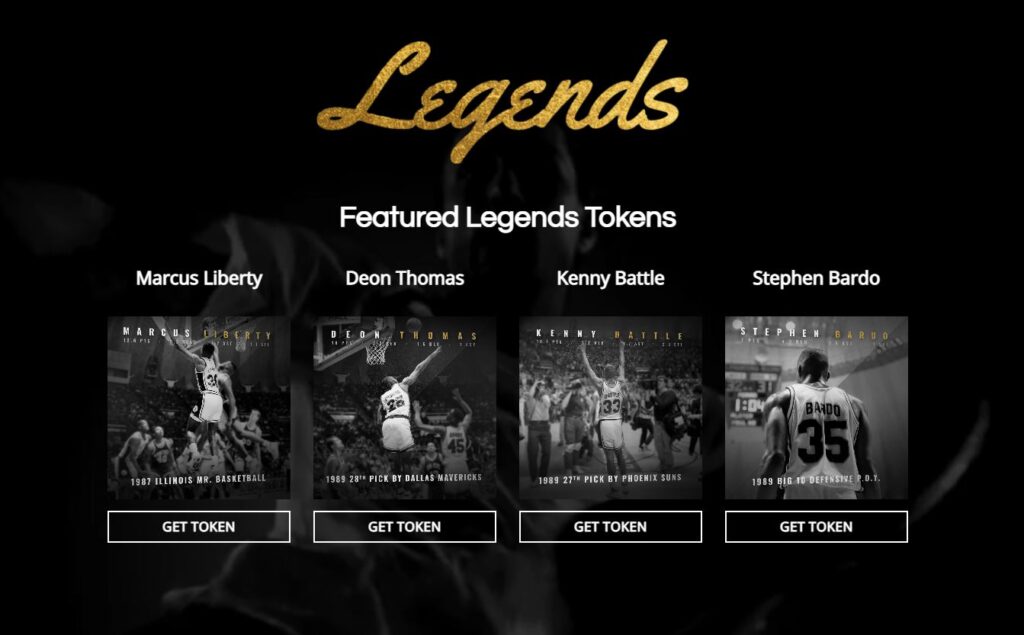 Fans of Battle, Bardo, Liberty, and Thomas can show their support by purchasing their digital collectibles here.

Battle was a standout basketball player at Aurora West High School (IL) where he helped his1984 team finish third in the Class AA state basketball tournament. Battle led the tournament with 86 points in four games. He played at Northern Illinois University from 1984–1986 before transferring to the University of Illinois. He was captain of the 1989 Illinois team nicknamed the Flyin’ Illini which reached the Final Four that year. Battle was a fan favorite due to his hustle and spectacular slam dunks. Now, the Illini basketball program awards the Kenny Battle Inspirational Award to the player who shows the most hustle during the season. Battle played in four NBA seasons for the Phoenix Suns, Denver Nuggets, Boston Celtics, and Golden State Warriors.

Bardo had an outstanding basketball career at the University of Illinois where he scored 909 points and compiled 495 assists. He was a key member of the talented ‘Flyin’ Illini’ team that played in the 1989 NCAA men’s basketball tournament Final Four. That same year, Bardo was named Big Ten defensive player of the year. Since then, Bardo has pursued a career in broadcasting where he has served as a color analyst for the Illini Sports Network, a sports reporter for WBBM-TV as an analyst and reporter for CBS Sports, and a color analyst for college basketball on ESPN and Big 10 Network.

Liberty attended Chicago’s King College Prep High School from 1984-1987. In 1986 he led his team to the IHSA State Championship and to a second-place finish in 1987. During the 1987 tournament, his 143-point effort stands as a class AA record in Illinois. In 1987 he was named a McDonald’s All-American, Illinois’ Mr. Basketball, and the Parade Player of the Year. At Illinois, Liberty was a key member of the 1989 ‘Flyin’ Illini’ team that advanced to the Final Four. He was then selected by the Denver Nuggets in the 2nd round (42nd overall) of the 1990 NBA Draft. He played for the Nuggets and the Detroit Pistons in his four seasons with the NBA.

Deon Thomas attended Chicago’s Simeon Vocational High School where he was a star basketball player. As a junior, he led his team to the Chicago Public League title. As a senior, he was named Illinois Mr. Basketball and played in the McDonald’s All-American Game. At the University of Illinois, Thomas finished his career as the all-time leading scorer in Illini history with 2129 career points scored and an 18 points per game scoring average. He is the only men’s basketball player in Illinois history to score at least 2000

career points. Thomas was selected by the Dallas Mavericks as the 28th pick in the 1994 NBA Draft. He chose to not play in the NBA but opted to play professional basketball in Europe and Israel.

NextName is a platform designed to support legends, college athletes, and teams through the sale of digital collectibles. With just a few clicks, fans can purchase collectibles bearing the name, image, and likeness (NIL) of their favorites. In doing so, NextName provides fans an opportunity to help student-athletes maximize their personal band and share in the success of college athletics. Following the initial University of Illinois launch, NextName plans to expand its digital collectibles platform to include athletes and universities across the country.