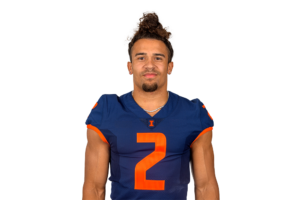 Chicago, IL, August 22, 2022 – London resident and University of Illinois football player Chase Brown has officially signed a ‘name, image, likeness’ (NIL) deal with NextName which offers fans the opportunity to support him through the sale of his personal digital collectibles, also known as non-fungible tokens (NFT). The collectibles are robust media file with images, music, school logo, and playing statistics. Brown directly receives the majority of proceeds from the sale of his digital collectibles.

NextName is excited to welcome Brown to the platform and invites fans to show their support by purchasing his digital collectibles here.

Brown attended St. Stephen’s Episcopal High School (FL) where he was a three-star recruit by 247Sports Composite and was his high school’s all-time leading rusher as a senior. He also anchored St. Stephen’s state champion 400-meter relay in track and field and holds school record in the 100-meter dash. After playing one year at Western Michigan, Brown transferred to University of Illinois where he continues to earn accolades and creates impressive numbers. Last year he led the Illini with 170 carries for 1,005 rushing yards and five rushing touchdowns, along with 14 receptions for 142 receiving yards on the season. He was two-time Big Ten Offensive Player of the Week and joined Howard Griffith (1990) and Rashard Mendenhall (2007) as the only players

in program history with multiple 200-yard rushing games in a single season. He is currently the only returning player in the nation with two of the nation’s top 17 rushing games from 2021.