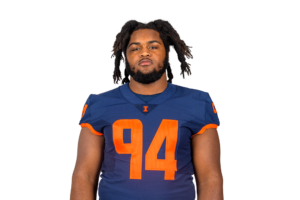 Chicago, IL, TBD, 2022 – St. Petersburg resident and University of Illinois football defensive lineman Jer’Zhan Newton has officially signed a ‘name, image, likeness’ (NIL) deal with NextName which offers fans the opportunity to support his through the sale of his personal digital collectibles, also known as non-fungible tokens (NFT). The collectibles are robust media file with images, music, school logo, and playing statistics. Newton directly receives the majority of proceeds from the sale of his digital collectibles.

NextName is excited to welcome Newton to the platform and invites fans to show their support by purchasing his digital collectibles here:

Newton attended Clearwater Central Catholic where he was a three-star recruit by 247, ESPN, and Rivals and he was a 2019 MaxPreps All-American. Newton had over a dozen college offers but chose to play at Illinois. As a freshman he played in all eight games and was the highest rated true freshman defender (85.8) by Pro Football Focus after his first career forced fumble and two tackles against Purdue 10/31/20. In 2021 he played in 12 games with 11 starts, led the team among defensive linemen with 50 tackles, was an All-Big Ten honorable mention (media), and earned Academic All-Big Ten honors.