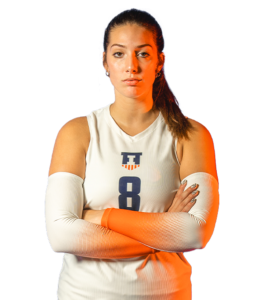 Chicago, IL, August 19, 2022 – Stillwater resident and University of Illinois volleyball player Maddie Whittington has jumped into the NIL space by officially signing a ‘name, image, likeness’ (NIL) deal with NextName. NextName offers fans the opportunity to support her through the sale of her personal digital collectibles, also known as non-fungible tokens (NFT). The collectibles are robust media files with images, music, school logo, and playing statistics. Wittington directly receives the majority of proceeds from the sale of her digital collectibles.

NextName is excited to welcome Whittington to the platform and invites fans to show their support by purchasing her digital collectibles here.

Whittington, 6’ 4”, graduated from Stillwater High School where she was named the 2019 Ms. Baden Volleyball Player of the Year by the Minnesota Volleyball Coaches Association Class as a senior. She was a two-time MNVBCA Class AAA All-State First-Team selection as a junior and senior and was named to the 2019 Under Armour Second-Team All-America. She helped lead her Stillwater High School team to the Suburban East Conference Championship in 2018 and a pair of state tournament appearances in 2017 and 2018.

Last year at University of Illinois, she was named to the Academic All-Big Ten and started nine of the 10 matches she played in, totaling 30 kills on a .264 hitting

percentage, to go along with 28 blocks, three digs and two assists. She will be a valuable member of the team this year.