New site allows fans to support her and other athletes 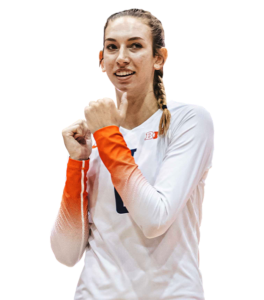 Chicago, IL, August 14, 2022 – Wahoo resident and University of Illinois volleyball player Kyla Swanson has officially signed a ‘name, image, likeness’ (NIL) deal with NextName which offers fans the opportunity to support her through the sale of her personal digital collectibles, also known as non-fungible tokens (NFT). The collectibles are robust media file with images, music, school logo, and playing statistics. Swanson directly receives the majority of proceeds from the sale of her digital collectibles.

NextName is excited to welcome Swanson to the platform and invites fans to show their support by purchasing her digital collectibles here:

Swanson, a four-year letter winner, led her Wahoo High School team to back-to-back Class C-1 State Championships in 2017 and 2018. She was also ranked as the No. 1 volleyball player in the class of 2019 in the state of Nebraska by PrepDig.com. Last year she ranked second on the Fighting Illini team with 106 blocks and a .329 hitting percentage, while also totaling 149 kills and posting 13 digs. Kyla has earned Academic All-Big Ten honors the last two years.